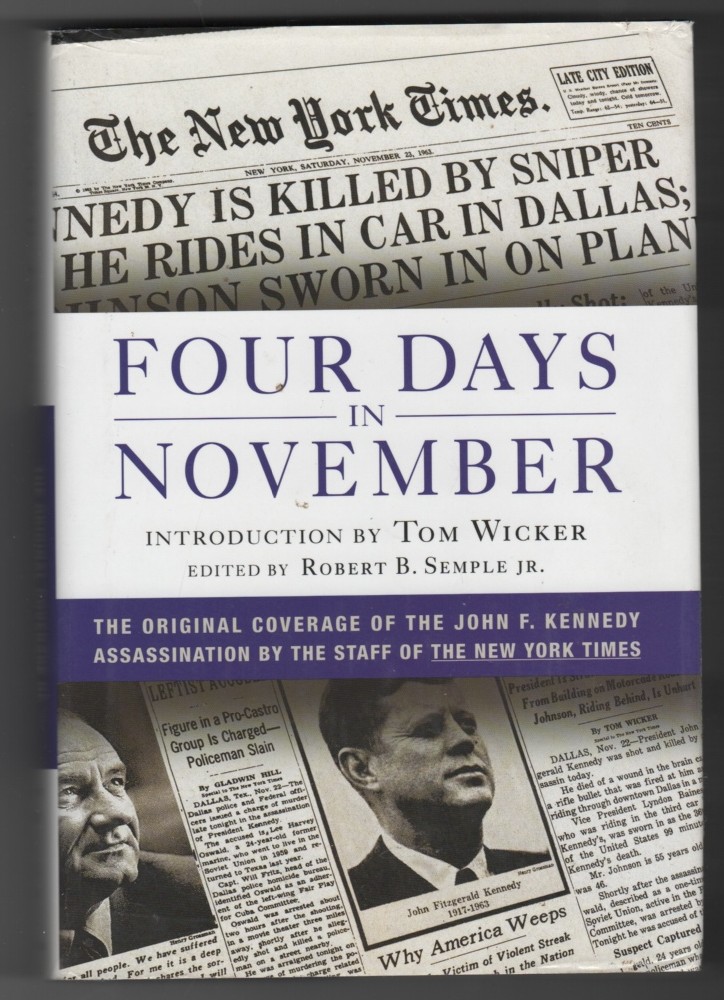 Four Days in November The Original Coverage of the John F. Kennedy Assassination

By: The Staff of The New York Times & Robert B. Semple & Tom Wicker

DJ shows light edge wear, small tears top fore corner. ; A bright, solid book, dustjacket in Mylar, unclipped. ; B&W Photographs; 9.50 X 6.46 X 1.80 inches; 628 pages; This volume is a compilation of the coverage of the JFK assassination and subsequent events during November 22 - 25, 1963, by the staff and reporters of the New York Times. An interesting perspective, and a review of the mood of the press during the first days after the death. "The assassination of John F. Kennedy in Dallas forty years ago remains, and will always remain, indelible in the minds of those old enough to recall it. The youngest elected leader in American history, a charming man leading what seemed a charmed life, by general consensus a president whose administration, having survived its early crises, was now at last hitting its stride, was shot and killed by a sniper firing a mail-order rifle from the southeast corner of the sixth floor of the Texas School Book Depository. So great was the shock that time seemed to freeze in the squinting glare of late-November sun. For four days in November 1963, the business of the nation ground to a halt.The coverage provided by The New York Times is still generally considered the most complete of its day. Almost miraculously, Times reporters, writers, and editors produced 250 columns, or about 200,000 words, on and about the very first day. The other three days were no less exhaustive. Through the combined efforts of, among many others, Tom Wicker, James Reston, Max Frankel, Anthony Lewis, Harrison Salisbury, A. M. Rosenthal, and Arthur Gelb, The Times covered history as it was happening, from the assassination to the funeral. Here were the first portraits of Lee Harvey Oswald and Jack Ruby, the earliest speculation regarding the prospects of Lyndon Johnson's administration, the immediate reaction from world leaders, and, perhaps most of all, the pulse of a populace reeling from an event that surpassed both understanding and belief.This commemorative volume provides a haunting, firsthand, and detailed chronology of the events that took place in Dallas and Washington from November 22 to November 25, 1963. Here is history being recorded in the moment---a recitation not just of facts but of emotions and reactions as they were being experienced. The clarity of the writing is matched only by the almost desperate intensity of its occasion. Getting all the news that's fit to print seemed the only way of keeping the world from spinning further into chaos; The Times's coverage provided not just information but a sense of balance. Though no one would ultimately explain to everyone's satisfaction the why, the who, what, and how were brought with amazing speed and accuracy within our grasp."

Four Days in November The Original Coverage of the John F. Kennedy Assassination