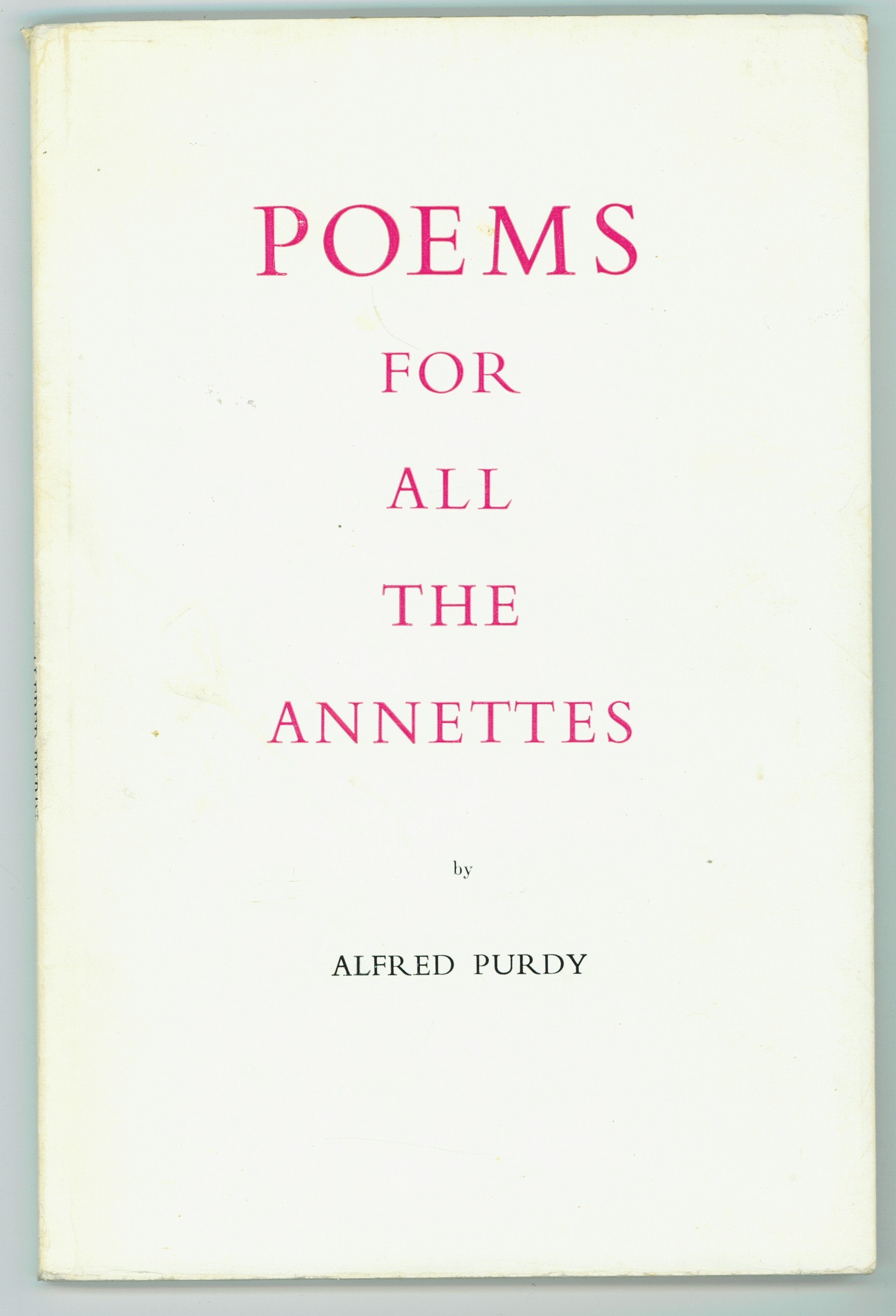 Poems for All the Annettes

Signed by Author; White dustjacket lightly soiled with some chipping to head of spine, some damage to front panel of DJ, pale blue card covers of book shows light wear, some foxing of page edges. ; Inscribed by author on front fly. This book was acquired from the daughter of the woman to whom it was warmly inscribed. She told me how the poet was a family friend (her father also served in the RCAF during WWII). A tight solid book, dustjacket in Mylar, unclipped. ; Trade PB; 8vo 8" - 9" tall; 64 pages; This was Purdy's 6th book and considered to be one of his finest. "Alfred Purdy came into attention in Canadian poetry in the post-war period, though like Souster, Irving Layton and others, he had been in the armed forces (RCAF) during the war and had begun writing earlier. In the Air Force he published privately a small book (he now wishes to forget), 'The Enchanted Echo' (1944). During his Wanderjahre he recalls "riding the freight trains across the the country to Vancouver and back"; operating a "taxi business" in Belleville, Ontario and helping to organize a union in a turbulent mattress factory in Vancouver." (jacket blurb) .. "was one of Canada's most celebrated poets. As famous for his turbulent, working man's way of life as for his poetry, he was the walking definition of a poet whose work encapsulated his life. His thunderous, resonant voice and personal charisma were unforgettable, among such contemporaries as Earle Birney, Milton Acorn and Irving Layton, he stood out easily. Proud of his working class roots in small-town Ontario, plainspoken and defiant to the end, Al Purdy helped define modern Canadian poetry. His poems were wide-reaching, touching on everything from his endless travels to the beauty of nature, from hockey players to his vision of social democracy. He wrote more than 30 books of poetry and prose and inspired and encouraged many young poets, among them Margaret Atwood, George Galt and Susan Musgrave. To many, Al Purdy was Canadian poetry personified, an accessible, unabashedly patriotic voice that was often obstreperous and cranky but never stopped taking on the world. It was a voice that had to be heard to be fully appreciated. Standing well over six feet tall, with a curiously loping walk, Al Purdy could inspire awe among his audiences, and his readings were as much theatre as poetry. His stentorian tones could clear a restaurant and his opinions were always passionate." (Harbour Publishing bio written on the occasion of Purdy's death)

Title: Poems for All the Annettes

Poems for All the Annettes