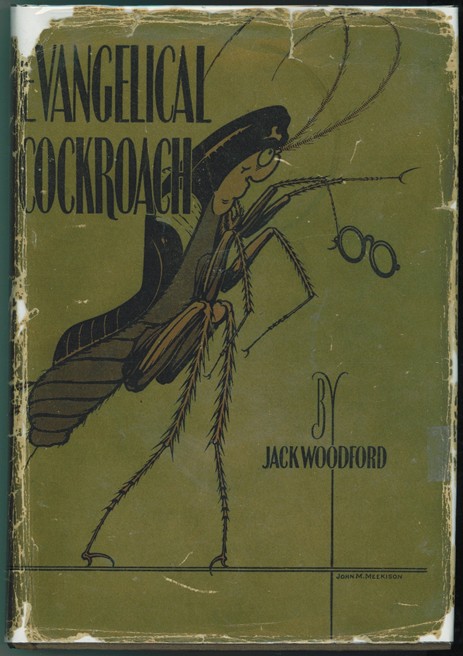 DJ quite worn, heavily chipped, with short tears, scratches on back. Book shows light fading around edges ; A tight solid book. DJ stabilized in protective Mylar cover; 309 pages; "He was born as Josiah Pitts Woolfolk in Chicago in 1894. His father was a doctor who died at age 49, thus he was brought up by his grandmother and educated at Northwestern University and Racine College.He started his literary career as a newspaperman working for several Chicago dailies, moving on to pulp magazines and to dozens of books. He was a skillful plotter, setting up clever situations and ingenious resolutions. In his autobiography, he states he sold over 1,000 short stories to over 60 periodicals. His book, Evangelical Cockroach provides 39 of his short stories.Jack Woodford was his first of many pseudonyms--Jack because he liked material written by Jack Lait and Woodford since his father had been born in Woodford County. Three of his many other pseudonyms were Howard Kennedy, Gordon Sayre, and Sappo Henderson Britt.A former telegrapher, he typed at machine gun speed, literally wearing out one to two typewriters each month. He said he could turn out a 1,200 word story in less then an hour without corrections."