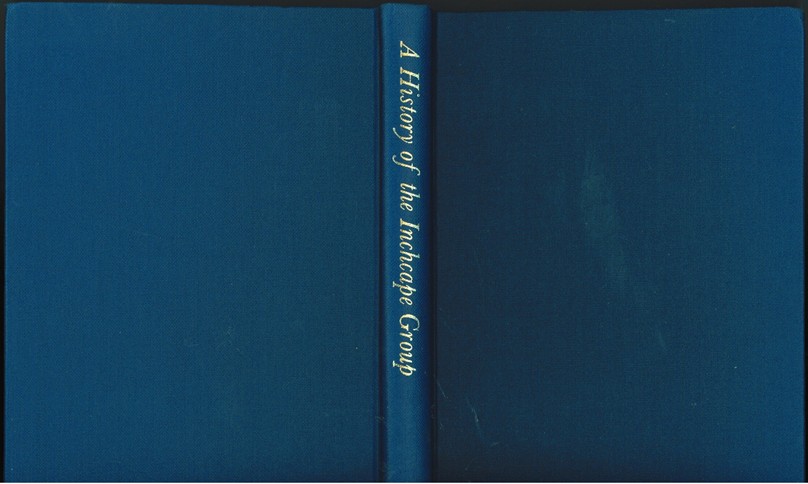 A History of the Inchcape Group

Light bumping top edge of blue cloth covered boards, clear mylar cover chipped, large chip base of spine ; A bright, solid book, gilt titles on spine. ; tall 8vo 9" - 10" tall; 211 pages; "1847 to 1950In 1847, William Mackinnon and Robert Mackenzie formed the Mackinnon Mackenzie Company (MMC), a general merchanting partnership based in Calcutta. In 1856 Mackinnon formed the Calcutta and Burma Steam Navigation Company to carry post to the region: the Company appointed MMC as their agents, secured contracts to transport British troops from Ceylon to India during the Indian Mutiny of 1857 and in 1862 floated on the London Stock Exchange under the name British India Steam Navigation Company.In 1874, James Lyle MacKay joined Mackinnon and Mackenzie in Calcutta and by 1914 was the sole surviving senior partner in MMC. Largely responsible for solving India’s currency problems and for the adoption of the Gold Standard, he was given a peerage by King George V for his services to industry in 1911. He chose the title “Baron Inchcape of Strathnaver” to commemorate the Inchcape Rock, which lies off Arbroath, and Strathnaver in Scotland. He later became a Viscount and finally, in 1929, he was appointed the first Earl of Inchcape.1950 to 1990By the 1950s, the Inchcape family had diverse interests around the world. This period bought new legislation and tax laws and, under the third Lord Inchcape, the family’s many interests, including MMC, were consolidated into Inchcape and Company. In 1958 Inchcape and Company became a public company and offered twenty five per cent of its equity for sale on the London Stock Exchange." Wikipedia The corporate group is still a vital thriving organization.

Title: A History of the Inchcape Group

A History of the Inchcape Group